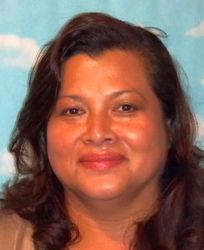 Syndie has been working at Fields of Green for 15 years. She has often received Employee of the Year awards for her exemplary service and for working far above and beyond her duties.

She has been married over 30 years and has a son, Shayne, who is now 20. He attended Fields of Green from the time he was in preschool until he was in 6th grade. He attended Pope John Catholic High School as an honor student and is now in West Point United States Military Academy.

Syndie came to America in 1985. She is a native of Seycheilles, an island off the east coast of Africa. Before working for Fields of Green, she worked as an accounting supervisor for a large company in California.

Syndie's duties at Fields of Green began as a French teacher, and then she worked a number of years here as an Elementary Assistant Teacher. She worked for a few years in the Sprouts Level as the Fine Arts teacher and now, after retiring in 2015, comes to substitute and help us out whenever needed. We just won't let Miss Syndie leave!